In the next few posts I will be introducing some of the background theory behind line array. I’m toeing a delicate balance here between teaching readers to suck eggs on the one hand and not missing out crucial theoretical foundations on the other. I don’t want to patronise, so please feel free to skip over those posts which focus on content you are already comfortable and familiar with.

Let’s start by reviewing the difference between line sources and point sources, the two principal types of sound radiating source we encounter in live sound reinforcement.

The above is in fact a bit of a simplification. The truth is that all of these are complex three-dimensional objects with three-dimensional radiating surfaces, but we can typically make the approximation to a point source at the majority of relevant listening distances.

We consider a point source to be a single infinitesimally small point in space, from which sound waves eminate spherically. Energy may not be equally distributed in all directions, but once it has begun its journey away from the source it will decay at a consistent rate in accordance with the inverse square law.

The inverse square law describes the propagation of a sound wave created by a point source. 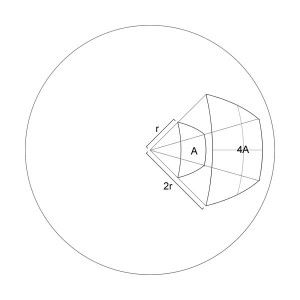 This segment represents a fixed portion of sound energy as it travels through the air. Sound intensity, which is the measure of sound power per unit area, is inversely related to the surface area of the segment. The larger the surface area the more spread out the energy is, so intensity is reduced the further we are from the source. Intensity is thus inversely proportional to the square of distance from the source (hence the inverse square law).

In simpler terms; a doubling of distance equates to a halving of the sound pressure. In decibels this is a decay of 6dB SPL every time we double the distance from the source.

As with point sources; no real life radiator is a true line source, however there are some that we can approximately to be a line source at certain listening distances. One really good example that has always stuck for me (I think it was from an environmental noise lecture) is traffic on a busy motorway – from a distance you don’t hear the individual cars, but the combined noise of the whole motorway which is one long line stretching across the landscape, and sound energy will propagate as per a line source.

The theoretical infinite length line source is perfectly focused with 0° dispersion angle in the plane of the line, effectively reducing the spread of energy to two dimensions.

In decibel terms this corresponds to a decay of 3dB SPL for every doubling of distance vs. 6dB from a point source.

The Two Advantages of Line Source

What we see here are two distinct and potentially advantageous behaviours which apply to line sources.

If line sources seem like the greatest thing since sliced bread then there is only one problem; the behaviour described above is that of a theoretical, infinite length line source which cannot truly exist in the real world.

Finite length line sources can exist, and their behaviour will approximate that described above given the correct conditions. However, creating a line source loudspeaker is quite challenging. A small number of products do exist – one pro audio manufacturer I have seen and been quite impressed by is Alcons Audio, who produce a range of enclosures using ribbon drivers – but these are not without their issues, generally being quite delicate.

For these reasons, line array (which is what we see commonly deployed in professional audio applications) cannot be considered a true line source. A line array is an array of speakers which individually will behave as point sources, but when assembled together can infer some of the desirable characteristics of a line source.

Unfortunately whilst a thoeretical line source is not particularly difficult to comprehend, line arrays are far more complicated.

I’ll leave the discussion here for this post, however avid readers should note that we have already dispelled the first of the great line array myths; that line array is equal to line source. Although an understanding of line source is helpful in building a basic appreciation of the possible benefits of a line array, line array is not a line source and its behaviour can be very different (arguably conveying even greater benefits when deployed correctly). At best we might describe line array as a practical approximation of a line source.

As line array does not behave exactly as a line source we also need to let go of the notion that line arrays decay at the 3dB rate. This is a very common misconception, born out of the confusion between line array and line source. Line source decays at the 3dB rate, but the decay rate of line array is much more complicated and there is no simple rule of thumb to describe it.